Analysis of DNA variation
We can also detect variations in the DNA sequence such as natural variations (polymorphisms) or mutations in the human or the mouse genome. We are analyzing single nucleotide polymorphisms (SNPs) and mutations by using a fast and reliable method utilizing specific hybridization of a dual fluorescent probe communicating by FRET and revealed by melting curve analysis after a real time PCR. This allows the genotyping of 95 DNA samples at a time in less than 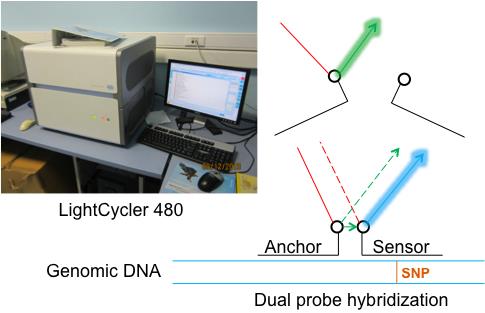 DNA methylation and gene expression
Methylation of DNA at CpG sites is mostly studied as a marker or as a determinant of cancer. In an original way, we study the role of CpG methylation in the dynamic regulation of genes expression in genes important for bone metabolism. This effect is directly measured at regulatory regions in genomic DNA purified from human bone trabeculae. Techniques used to analyze CpG methylation are classical sodium bisulfite treatment of DNA (transforming non methylated Cytosine to Uracil) followed by PCR amplification using modified primers. PCR products are then subcloned and individually sequenced.

Regulation of gene expression by microRNAs
We are analysis miRNA function in bone cells using gain and loss of function strategies. We are quantifying miRNA in cultured cells, but also in bone samples (RT-qPCR, Taqman). We are also identifying and validating miRNA target genes (miRNA mimics and inhibitors, reporter plasmids, Western blots…).

SiRNA strategies
SiRNA are small synthetic ADN molecules able to provide sequence-specific gene silencing by guiding sequence-dependent endonucleolytic cleavage of the mRNAs that they target in cells. We use different SiRNA strategies to knockout a targeted gene expression in culture of either established cell lines or primary cells, mostly of bone origin. We introduce SiRNA in cells by either simple transfection of synthetic molecules or by introducing an expression vector. The vector is provided to the cell by transfection or by lentivirus transduction. Delivering an expression vector to the cells produces a transient transfection but may also generate established cell clones.